It’s no secret that the DC comics-inspired films have been lackluster for the most part, but their animated content generally does fairly well. Cartoon Network used to house the Teen Titan show that I was a huge fan of back in the day. A few years back, they announced that the Teen Titans were returning as Teen Titans Go!…but that was a dirty lie. This new version of the Titans – while still voiced by the original actors – were crudely drawn, more immature, and hardly resembled superheroes at all. So, there’s no way Teen Titans Go! To the Movies (2018) could be any good, right? Well, if you were thinking that like I was, it appears we were very, very wrong.

Teen Titans Go! To The Movies nudged me out of my pessimistic attitude and pushed me into begrudging respect

The Teen Titans are tired of not being taken seriously by the other superheroes, which becomes more apparent when everyone else is getting a movie except them. Robin (Scott Menville) is the most hurt by this, as everyone else involved with Batman seems to be getting a spin-off, but the young sidekick is left wanting. However, Robin and his team see a chance to prove themselves by taking down Slade (Will Arnett) and thwarting his diabolical plan of world domination.

The summary above probably sounds pretty stock with the exception of the meta-commentary about superhero movies. However, much like the annoying animated series on Cartoon Network, Teen Titans Go! To The Movies is focused on humor rather than superhero exploits. It is quite possible that this is the best parody or spoof film that has been made in years. There are many jokes that are very immature in their very nature – at least two sequences are dedicated to the butt and things that come out of it – but there are tons of nods that both movie lovers and comic book nerds alike will love. One is the voice actor cast to do Superman and a few subtle jokes that get thrown into the film that you could easily miss. While I can’t deny I laughed at some of the dumber jokes, it was the references and affection meshed with the mockery that won me over. 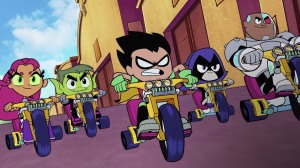 It didn’t take long for me to feel the slightly begrudging stature that I established as the movie began (arms firmly crossed with a stern expression on my face) break as the film got going. I’d gone in knowing that the critics had been praising it, but I couldn’t imagine why or how. I never attempt to hide my bias when writing reviews, as I think transparency in my opinions matters to how the readers use them. Thus, I’d gone in expecting to dread the entire runtime of the movie and walked out smiling and impressed at what they made. If that’s not a ringing endorsement for the movie, I don’t know what is.

There are numerous moments that I would love to discuss in detail, but I feel it could easily take away from the experience. The jokes should be able to land for you the same way they did for me. Some were shockingly intelligent, others were just shocking, and some managed to tickle my juvenile funnybone. It didn’t hurt that the crowd I had, which was small and shouldn’t have been on the peak pricing list – yeah, I’m calling you out, Moviepass – was full of kids laughing in the purest way possible. In the end, Teen Titans Go! To the Movies earns the Must See rating.