Mission: Impossible – Fallout (2018) is more than just the sixth film in this 22-year-running Tom Cruise-led franchise. It’s the first in the franchise to have a director – Christopher McQuarrie, in this case – return. Fallout is also the first film that has elements of the previous film’s story directly influence the main plot of the current one. Plus, Rebecca Ferguson and Sean Harris both reprise their roles from Rogue Nation, which is an interesting first, considering they aren’t officially a part of Ethan Hunt’s team. So, the sixth film of the franchise doesn’t just rehash all of the old elements that the fans love – it also ensures that it doesn’t deviate from the formula too much, leaving the audience with something old and something new. This is an equation that adds up to one hell of an entry into the series.

Ethan Hunt (Tom Cruise) is still cleaning up the mess that – after capturing Solomon Lane (Sean Harris) two years earlier – sprang from the Syndicate. Followers of Lane, who have taken to calling themselves The Apostles, are teaming up with a mysterious political figure known simply as John Lark who has plans to use a nuclear weapon to tear down major elements of the establishment to begin to rebuild the world. IMF is forced to bring in CIA agent August Walker (Henry Cavill) after an early mission to prevent Lark from getting his hands on Plutonium fails, which ultimately raises the stakes and the questions of who can trust who. 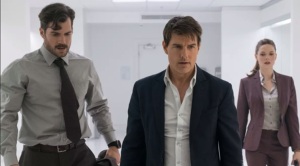 Fallout features some of the craziest stunts that Tom Cruise has done while playing Ethan Hunt. An early stunt involves Hunt and Walker jumping out of a plane so far into the atmosphere that it requires oxygen tanks and full body suits. It’s a stunning scene just watching it happen in the film, but knowing the details that went into it make it all the more shocking that it exists. Cruise had to jump out of the plane 106 times in order to get the three takes the filmmaker and he wanted. Plus, to film the whole thing, they had to use a cameraman who was a skydiver equipped with a head-mounted camera (for more of these details read this Deadline article). It’s this kind of passion (and maybe a bit of insanity and sheer disregard for one’s own life) that makes the Mission: Impossible stunts so memorable.

Of course, if the franchise solely relied on stunts around characters we didn’t love or care about, it probably wouldn’t have lasted so long. Hunt is a compelling lead, but the people who support him are the ones that keep me coming back. Benji (Simon Pegg) and Luther (Ving Rhames) have been a key part of the franchise, and are among my favorite elements in the series. While several characters have come and gone, some leaving big impressions and others outright forgettable, Ilsa Faust (Rebecca Ferguson) gets to rejoin the male trio in this film. She has been a great addition to the cast, getting major moments in Rogue Nation and is the first female agent returning in another film. Alec Baldwin returns in this film as well and gets at least two moments where he reminds the audience that he is a talented actor. The relationship between the characters and Hunt’s passion for saving them and the world make this franchise one that still has legs despite its long-running (and often repetitive) stories. 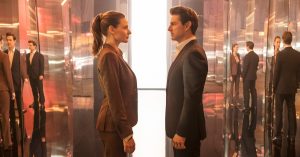 The redundancy and predictability of Fallout’s story is its weakest element. However, McQuarrie and co-writer Bruce Geller manage to still squeeze surprises into the familiar formula of the MI series. To be fair, some of the formulae is more genre-specific. Spy movies will often feature nuclear weapons, as they pose the biggest threat to our way of living. The genre relies on secrecy, so double crosses and not knowing who to trust will always play a role in the story. Knowing those recurring elements leads the audience to hope that the filmmaker has figured out some new way to do it that will both surprise the audience and be believable within the context of the film. McQuarrie and Geller achieve this at least twice during Fallout, making the few predictable elements make sense to the greater storytelling choices.

In the end, Mission: Impossible – Fallout was a total blast, even though it’s two and a half hours long. The film features some of the best action set pieces released this summer, and are full of suspense and humor (thank you, Simon Pegg). Cruise has totally embraced this character, and his love and passion for the project shines throughout. He, like his character, is willing to risk everything to accomplish the goal; and he succeeded. Fallout receives the Must See rating.