Denzel Washington returns to play Robert McCall in Antoine Fuqua’s The Equalizer 2 (2018). Much like the first film, the first half is much stronger than the second – but the story in this one is much more convoluted. Washington manages to make McCall a very compelling character until the film decides to be more of a ridiculous action film.

Robert has continued his brand of vigilante justice that began after his friend was put into the hospital in the first film. The first sequence in this film has him all the way in Turkey, pursuing a kidnapped child to return her to her mother. It seems that he takes joy in rescuing the lives of those around him that he deems to be good people. The only people from his old life that know he’s alive are Susan (Melissa Leo) and Bill Plummer (Bill Pullman), and he values them greatly. Susan is attacked while on assignment and it makes Robert confront loss again, which is something he has been avoiding.

Robert also connects with a neighborhood teenager, Miles (Ashton Sanders), after a local gang tags the walls of his apartment building. Miles is at a crossroads, teetering between joining a gang or following his artistic passion. Robert looks to push him in the right direction, but the incident involving Susan makes him lose sight of this local mission. If this sounds far too complex, that is because it kind of is. There is a lot going on in this movie, including Sam Rubinstein, a regular Lyft customer of Roberts, who is trying to prove his ownership of a painting of his sister he hasn’t seen since they were separated during World War II. There are at least four storylines in this film, and it really only needs two of them. 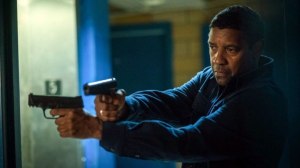 My biggest issue with both films is that the character that Robert is portrayed as in the first half is so compelling, cautious, and calculated, but the person he is in the second half shows none of those characteristics. In the first film, the last action sequence is reminiscent of Home Alone – and the second film follows a similar, over-the-top premise. I’ll avoid specifics here, but there were moments in the last act that had me laughing at how ridiculous Fuqua and writer Richard Wenk went with it. Robert is a person who we have seen be extremely meticulous to the point that it seems clear that he has obsessive-compulsive disorder. He is able to analyze a situation and essentially time how long it will take for him to dispatch the bad guys. Yet, in the final act, he seems to be winging it and taking chances that he earlier would never have taken – all for the sake of the big action finale. It seems to clash tonally with the first half of the film and just leaves me with a bad taste.

The Equalizer 2 has some moments in the beginning, but definitely gets over saturated with the story, and it concludes with a silly ending. The stylistic flourishes from the first film that bothered me are mainly absent here (like the rapid cuts to various shots of the city), but the tonal shift that occurs is worse in this one. This is one sequel that probably could have stayed unmade, earning the rating of Not a Total Waste of Time.