It was finally time I watched Antoine Fuqua’s The Equalizer (2014) in preparation for the upcoming sequel. The first half of the film was great, and allowed the characters to be something…but the second half turns into an over-the-top, stylized action flick. Still, Denzel Washington should consider changing his name to Denzel Watchable, because it doesn’t seem to matter which movie he does – he brings his A-game every time. So, while I laughed at a few of the more ridiculous choices Fuqua made, I enjoyed enough of the film to have a little hope for the sequel.

The Equalizer was enjoyable thanks mainly to Denzel Washington’s performance

Robert McCall (Washington) is retired and living a quiet life working at Home Mart. He spends a lot of his time trying to help people he encounters in his life. One girl he meets at a local diner name Teri (Chloë Grace Moretz) is a young girl caught up working for Russian gangsters as an escort. Robert quietly observes as she gets in deeper, until he can no longer sit quietly reading his book and sipping tea, and has to take action. 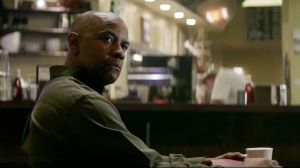 Learning about Robert’s dull life, obsessive quirks, and how he treats the people in his life is such a great section of this film. There is a mystery about him that is emphasized by his Beavis and Butthead inspired co-workers, who inquire about his past to help establish the mystery. Unfortunately, the trailer revealed the premise, so the mystery element of his past isn’t that much of an enigma. Still, the movie takes its time establishing his routines, and the relationships he has developed with Teri and Ralphie (Johnny Skourtis), a co-worker at Home Mart who needs help passing the security guard test. Though once the key incident with Teri happens, the film shifts tones a bit.

The performances in the film are all relatively strong, but some of the stylistic flourishes feel out of place – particularly the final action sequence that could best be summed up as Home Alone: Lost in Home Mart. Robert lures the bad guys onto his home turf, and rather than taking on them in the direct way he has in every other action sequence, he decides to set up a series of traps. He also puts his friends’ lives in danger multiple times during this sequence. The slow-motion choices that Fuqua employs here feel so different than the first half of the film that it does tarnish it – but not enough to completely wreck it.

In the end, The Equalizer was compelling at times, laughable at others, and felt about thirty minutes too long. Still, there is something here that makes me slightly hopeful for the sequel. Denzel definitely knows how to bring it, and hopefully, someone reigns in Fuqua’s decision making so the film feels more consistent throughout. The Equalizer earns a Decent Watch rating.