Noah Baumbach films always land very differently with me. While he definitely has a distinctive style and voice, my reaction to what he is saying seems to always be wildly different. I’m a fan of his Netflix original film, The Meyerowitz Stories (New and Selected), I enjoyed Mistress America and Frances Ha, and Margot at the Wedding and The Squid and the Whale made me extremely uncomfortable in a way that makes me never want to watch those two films again. I also have a varied reaction to Ben Stiller films, but I tend to like him in his more dramatic films as opposed to his stupid comedies. Thus, I’ve found myself hovering over While We’re Young (2014) many times in my various streaming services and usually opting to wait – but I finally caved and gave it a watch.

Initially, the film seems to be a simple story about a middle-aged couple, Josh (Ben Stiller) and Cornelia (Naomi Watts), who is going through a simultaneous mid-life crisis and find an escape through a young couple. After their friends have a baby, Josh and Cornelia are feeling a little lost and disconnected from the world they’ve known. That’s when Josh meets Jamie (Adam Driver) and Darby (Amanda Seyfried), an obnoxious hipster couple, who sat in on one of his film classes. Both Josh and Jamie are documentary filmmakers at different stages of their careers, and the couples are at very different stages of their lives. 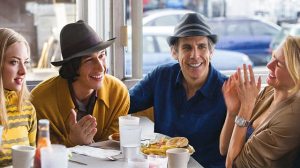 The interactions all the way across the board from them together as a couple, to individually splitting up, or to hearing Josh gush about his new found friend are often extremely funny and relatable. While I’m still several years younger than Josh and Cornelia, I’m at a point where I often feel like they do. I quickly connected with Josh and his desire to change. Through the course of the film, Josh has to face many realities about himself, his career, and his values. Baumbach excels at this type of character development, and this is ultimately why I enjoyed the film.

What surprised me about the film was the arch that Jamie is given and the role his character ends up playing to the overarching plot. It was easy to see it coming, but, having seen several other of Baumbach’s films, it felt very out of place for this filmmaker’s movies. Technically, the following statements could be a spoiler – so skip to the next paragraph if you want to go in blind. Jamie is the true antagonist, and this is hinted at throughout the movie. It initially seems like Josh’s own insecurities causing him to distrust Jamie, but he is ultimately proven right. Yet, while everything Josh feared turns out to be true, it’s also not received as dramatically by the other people when he reveals the truth. The lesson ends up being that Josh needed to look at his own values and understand that the rest of the world may not share his perspective of the world. It could be a self-reflective lesson that Baumbach has learned – that he will make films that mean something to him, but just because they aren’t received by the masses doesn’t mean he’s wrong nor are they…it’s just that they hold different things to be important.

In the end, I did enjoy watching this film and definitely place it on the higher end of his films. I think Stiller and Watts are the key reasons for my enjoyment of the film. Driver really plays into his hipster-type in this film, and it is a little obnoxious – but it does work really well, too. While We’re Young earns a Decent Watch rating.