There is much to love in Ant-Man and the Wasp (2018), especially if you were a fan of Peyton Reed’s first film. Paul Rudd and Michael Peña bring an abundance of charm and humor to the story that the film is telling. You get some awesome female characters who kick more butt than the men in the film. Finally, you get some great family moments amidst of the sci-fi superhero action elements.

Scott Lang (Paul Rudd) has been on house arrest since the events of Captain America: Civil War. He’s only a couple of days away from being free to leave his house when Hope Van Dyke (Evangeline Lilly) and Dr. Hank Pym (Michael Douglas) contact him with an urgent mission. Scott has to decide to whether or not he should once again take up the mantle of Ant-Man and team up with the Wasp, or stay put and ensure that he’s around for his daughter.

Luis (Michael Peña) stole the show in the first film and does a great job of repeating that feat. Who would think that a non-costumed character could possibly be the favorite in an MCU film? The way the character tells stories is too endearing and comedic to not love. Kurt (David Dastmalchian), Dave (Tip “T.I.” Harris), and Luis has teamed up with Scott to start an aptly-named security business called “X-Con”. Scott still relies heavily on these guys, and it’s great to see them evolving from the first film.

In fact, many relationships have evolved in the film since we last saw them. Scott and Hope have hit a rough patch, but Scott’s ex-wife and new husband seem to be much happier with him despite the house arrest. Hope and Dr. Pym are closer than they were at the start of the first film. The story this film takes on is similar yet different from the first film, but in a way that makes natural sense. The film doesn’t solely focus on the old characters, though, as a few new ones are introduced.

The stand out has to be FBI agent Jimmy Woo (Randall Park), who gets some of the best interactions in the film. He is a serious agent who will often allow his human side to show. An early scene has Scott show a magic trick he’s learned while on house arrest. Initially, Jimmy Woo seems unimpressed and stoic, but right before the scene ends, he seriously asks Scott how he did the trick. Aside from Woo, there is Ghost (Hannah John-Kamen), Sonny Burch (Walton Goggins), and Dr. Bill Foster (Laurence Fishburne) who all get a little to do, but majorly affect the story. 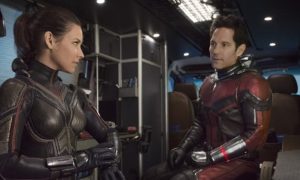 Of course, Hope was in the first film, but this is the first time we get to see her as Wasp. She kicks so much butt in this film it’s kind of disappointing she wasn’t suited up in the first. Lilly plays the character well and manages to garner plenty of sympathy for her part in the story. She projects confidence that makes her perfect for the role. Of course, there is a lot of women kicking butt though as Ghost gets her share of action moments. John-Kamen also brings that confidence and has to play it with a tinge of anger, which she does very well.

Ultimately, this is a solid sequel that is a lot of fun for the whole family. There are good action sequences, a compelling, straightforward plot, and tons of laughs. Watching Ant-Man and the Wasp made me want to rethink the placement of the first film on my MCU list. I have loved most of the Marvel films, and this one is no different. Thus, the film earns the Must See rating.