Shailene Woodley wasn’t always a draw for me since I first saw her in The Secret Life of an American Teenager; but after seeing The Descendents, The Spectacular Now, and The Fault in Our Stars, that has turned around. Additionally, Adrift (2018) looked to be a film that would feature two characters isolated on a boat for the bulk of its runtime, which is something I’ve not been a fan of in films with similar setups. Fortunately, the plot structure that director Baltasar Kormákur and writers David Branson Smith, Jordan Kandell, and Aaron Kandell used to tell the harrowing tale of Tami Ashcraft’s works to keep it engaging from beginning to end. Not that there aren’t some questionable choices, but Ashcraft’s true story is so compelling that it would have been hard to make this a bad film.

Adrift has some moments that are debatable, but the movie tells a story that’s worth hearing in an intriguing way

Tami Oldham (Shailene Woodley) has lived her adult life traveling around from place to place, taking any odd job that will help her pay for her next adventure. In Tahiti, she meets Richard Sharp (Sam Claflin), who sailed in on a boat he built – and sparks fly. After spending several months together on the island, they’re offered a job sailing another boat to San Diego, where they encounter a hurricane that leaves the boat wrecked and them significantly off course. Richard’s injuries render him incapacitated, leaving Tami to do everything to ensure their survival.

The film opens with Tami waking up after the hurricane to find the ship badly damaged, herself injured, and Richard missing. The nonlinear structure of the storytelling keeps the premise from ever feeling boring. We aren’t spending an hour with the couple lost at sea…we crosscut back and forth to their blossoming love and their increasingly dire situation, as days go by with no signs of land. Initially, I thought the film’s start was a cold open that would then reset, and we would eventually catch up to the moment we saw first, which has become an increasingly annoying trend. Luckily this wasn’t the case, which enhanced the experience of the film. 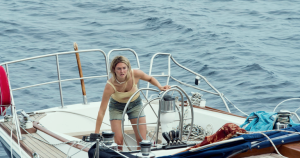 Woodley has to give an incredibly strong performance, as Claflin spends much of the film injured. She manages to be both vulnerable and strong at the same time, making her heroic moments extremely believable. The two have strong chemistry during the scenes where they are developing their relationship, which makes the injured scenes all the more powerful. They made me care about their relationship and their well being, and thus the stakes were real. I’d not known this was a true story when I went into it, but that revelation made it all the more powerful. My biggest complaint of the film would require me spoiling a major element, and thus I’ll have to omit it for now. There is a moment in the film that I think can make or break it for some – but after thinking deeply on it, I feel it may have some positive elements that I did not initially consider.

Adrift is definitely a movie that is worth a viewing. Knowing that people experienced this crazy story is reason enough to check it out. I’d love to see Claflin get a film where is able to do a little more than be the charming love interest, but Woodley has definitely become a draw despite the fact that I find her voice annoying at times. Adrift earns a Decent Watch rating.