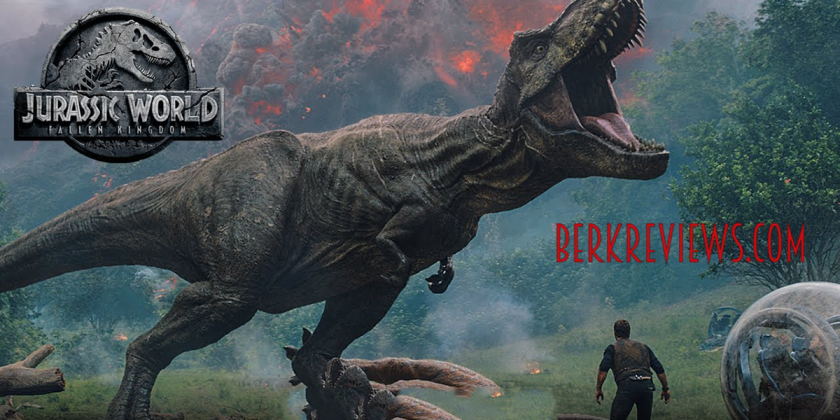 The Jurassic franchise has been a favorite of mine for a long time. Jurassic Park is in my top five favorite movies, I enjoy parts of both Lost World and Jurassic Park III, and – contrary to many other critics – I found lots of joy in Jurassic World. Despite my general affection for the films, the marketing for Jurassic World: Fallen Kingdom (2018) did not have me feeling very hopeful going into my showing of the film. It’s definitely not as good as Jurassic Park or it’s direct predecessor, but it still managed to be entertaining enough.

Fallen Kingdom starts three years after the events of Jurassic World. Isla Nublar and all the remaining dinosaurs are about to be wiped out by a now active volcano. Eli Mills (Rafe Spall) offers to send Claire Dearing (Bryce Dallas Howard) and Owen Grady (Chris Pratt) to the island to rescue as many dinosaurs as possible – especially Blue. Once on the island, nothing goes as planned, and the rescue mission changes shape multiple times.

There are many things to dislike regarding this film…a number of moments are corny, we are given a weak villain, and several aspects of the movie are basically knock-offs borrowed from the previous films (although some are used more effectively than others). Yet, there are still highlights, like Chris Pratt. His charm and general heroic demeanor make it hard not to enjoy Owen and his connection with female lead of the Jurassic World films: Blue. Sorry Bryce, but Blue is Owen’s one true love, and their relationship is the one that earns the most intrigue. Who cares if Claire and Owen get together – I desperately need to see more of Blue and Owen’s relationship.

Much of what I want to discuss would definitely qualify as spoilers, so I’ll refrain and instead opt to complain about trailers again. Too much of the third act is revealed in the trailers. While a lack of context still allows some of these moments to take on a different meaning in the film, it’s a trend that needs to be stopped. Even aspects of the resolution were shown in some of the later trailers, and they basically tell you where the story is going to go. Not that Derek Connolly and Colin Trevorrow’s story isn’t slightly predictable – tough there was one new element introduced that is certainly worth exploring, but it appears that they want to wait until the next movie to truly explore the ramifications of the reveal.

The  Velociraptors in Jurassic Park haunted my nightmares for weeks after seeing the film the first three times in the theater. The new Indoraptor was promised to bring back some of the scary moments from the original film…but director J.A. Bayona just isn’t able to recreate these suspenseful moments. In fact, the sequences involving the Indoraptor start with a solid bit of action and excitement, but the whole scenario involves an unexplained room change, which was noticeably jarring. It felt like somewhere along the way, a scene may have ended up on the cutting room floor that was crucial to clearing up where Owen went after fighting his way to the new creature.

Jurassic World: Fallen Kingdom has enough here that fans of the franchise will probably be more positive than negative. Yet, it’s not as fun as Jurassic World, nor does it manage to channel the suspense or fear of the other films. There are a couple of scenes that may end up elevating this film on subsequent viewings (for example, like how the sequence involving the trailer dangling from the cliff in The Lost World manages to make me ignore the gymnastic raptor-kick in hindsight). Fallen Kingdom earns a Decent Watch rating.