The fact that three movies exist based on the Fifty Shades books is bad enough…so when the trailer for Book Club (2018) dropped, I was flabbergasted. E.L. James, the author of the books, was going to get more publicity for her trilogy by having a group of terrific, older actresses sit around and discuss her book on-screen. Yet, the cast and the comedy was enough to make me give it a chance after my wife expressed interest in seeing it. Fortunately, it was far better than my experience of seeing Fifty Shades Freed earlier this year.

Diane (Diane Keaton), Vivian (Jane Fonda), Sharon (Candice Bergen), and Carol (Mary Steenburgen) have been friends for most of their lives, and have kept in touch via their monthly book club. Vivian introduces the girls to “Fifty Shades of Grey” after being bored with their previous book and wanting to encourage her friends to spice things up a bit. Each woman is at a different point with their love lives, but this book sparks something different in each of them. 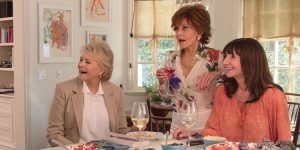 Diane’s husband passed away a year prior, and her daughters Jill (Alicia Silverstone) and Adrianne (Katie Aselton) are treating her like their child. Their roles have reversed, they are trying to convince Diane to move to Arizona to be closer with her daughters. Sharon is a federal judge, has been divorced for eighteen years, and has been abstinent since that time as well. Hearing that her ex-husband has just gotten engaged at the same time as their son, along with the fire started by the book, has motivated her to get back out there. Carol has been happily married, and had a very active sex life with her husband, Bruce (Craig T. Nelson), until six months ago. The book has made her realize how dull their marriage has gotten, and motivates her to try and dump gasoline on the dwindling flame. Vivian has never had a problem with sexual exploration, but she has purposely kept herself distant from men. So when Arthur (Don Johnson) – an old fling who she hasn’t spoken to since she refused his proposal – checks into her hotel, her perfect world is suddenly confronted with regrets from the past.

The three lead male characters – Johnson, Nelson, and Andy Garcia – are all terrific in this film. The many women in my screening seemed to be the most charmed by Garcia, including my wife, who felt the need to express that while existing the theater…though I agree. Garcia’s character, Mitchell, meets Diane on her flight to Arizona in a funny series of awkward moments caused by her nervousness of flying. Their relationship grows in fun ways from there, but her struggle with her daughter and her nervous personality made her story my least favorite, with Diane being too obnoxious for me to enjoy. However, Arthur was the character that I most related to and empathized with throughout his attempts to get Vivian to see that he loved her as she was.

Not to leave out Sharon, or Carol and Bruce; everyone gets something to do, and they all have some great moments in the film. Sharon’s date with George (Richard Dreyfus), whom she met online, is very charming and funny. Plus, she gets a few moments with her ex-husband that subvert expectations, and show a level of sophistication that is often lost in romantic comedies. Carol and Bruce are an older married couple who have such a long history, and clearly, a lot of love which plays very well. Their complacency, along with his feelings of inadequacy after retirement, are easy to connect with for any long-term couples.

Book Club ended up being a perfectly enjoyable romantic comedy. Its humor gets a little raunchy at times, but for the most part, it’s good clean fun. However, it’s definitely not a film that everyone will enjoy. Book Club earns the Decent Watch rating.