Broken Lizard is back with Super Troopers 2 (2018), which manages to recreate a lot of the fun from the first film. Some of the elements you loved from the first are back or at least referenced. While the plot is similar, one will find that the humor is familiar as well. The film brings with it some cameos – some for shock value, others for bigger roles – while the original cast who played our state troopers return.

Despite losing their station and then their jobs at the local police department, the Vermont State Troopers are back to help with a border dispute between the US and Canada. It seems that there is a section on the Vermont border that had the lines drawn incorrectly, and now Vermont is about to get a little bit bigger. Thus, the boys are assigned to an old station house over in Canada, and Captain O’Hagan (Brian Cox), Thorny (Jay Chandrasekhar), Mac (Steve Lemme), Foster (Paul Soter), Rabbit (Erik Stolhanske), and even Farva (Kevin Heffernan) have to deal with the resistant Canadian citizens who aren’t thrilled about suddenly becoming a part of the US. 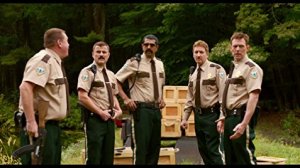 It takes a while before Super Troopers 2 finds a moment to get back to some of the highway shenanigans from the first film. Some of the highlights from the first film come from the various traffic stops that the guys do, and how they mess with the various lawbreakers. However, once they get there in this film, the magic is back…and surprisingly, they’ve found new bits for the routines. Jim Gaffigan reprises his role from the first film and asks the guys if they remember the “meow” bit. This clip is seen in the trailer, but it plays much differently than I had expected, and isn’t just a rehash of the old favorite scene.

The film even opens with different state troopers played by Seann William Scott and Damon Wayans Jr., who has pulled over a tour bus. It’s driver, played by Clifton Collins Jr., warns the musicians in the back that 5-0 is coming on-board, only to reveal it’s the Broken Lizard crew. The scene plays to quickly give the audience some exposition, which will later only be half true, and set the comedic tone for the film right away. Again, this film isn’t trying to do much other than giving the audience a good time, and maybe a few quotable lines.

Rob Lowe, Emmanuelle Chriqui, Hayes MacArthur, Tyler Labine, and Will Sasso take on the rival Canadian crew to some degree. It’s not exactly the same antagonist set-up as the first film, but it is very close. It’s not quite meta-commentary on sequels, though a few references seem to imply that is what the Broken Lizard crew was going for. Nonetheless, the new cast is fairly entertaining, and they play off of the returning cast well enough to make the scenes laughable.

My theater was primarily empty when I saw it, but I couldn’t hold in some of my laughter. These guys just crack me up in these roles. I love all of the stations, including Farva – who is still obnoxious – but he felt slightly more accepted in this continuation of the first film. This is definitely not a film that will appeal to everyone, and it’s not quite as good as the first. Ultimately, it’s still enjoyable; so Super Troopers 2 earns a very positive Decent Watch rating.