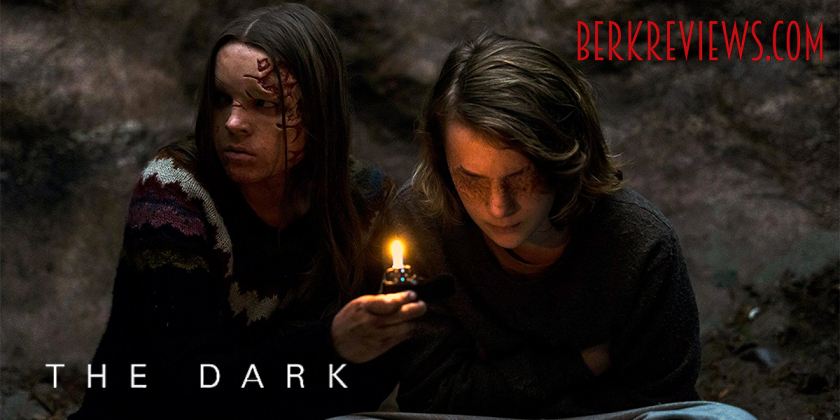 The premise of The Dark (2018), directed by Justin P. Lange, is compelling: flesh-eating monster living in the woods takes pity on a young boy and doesn’t quite understand why. While there are a few good moments in the film,  it ultimately suffers from some cheesy dialogue and questionable character motives.

The Dark has cool elements, but ultimately was unenjoyable

Mina (Nadia Alexander) has been hunting in the woods outside of her childhood home since her own murder. She relentlessly kills and eats anyone foolish or unfortunate enough to show up, until she meets Alex (Toby Nichols). He has clearly been abused, and is too scared to get out of the car until the driver returns – and Mina takes pity on this young, damaged teenager.

Nadia Alexander gives a good performance in her role. She has to play dual roles in this film…one as the ghoul Mina, and another as just Mina in flashbacks which provide insight into her situation. There are a few moments where her screams or growls come off as silly rather than scary. Unfortunately, Alex comes off as too whiney, and a choice he makes later in the film doesn’t really work for the story that is being told. There is a connection between the two characters, but parts feel unearned.

The film has a few scenes that are either too silly or just plain bad. Often, these scenes include weak dialogue that characters have to say to fill in gaps of exposition. For example: there is a group of hunters who are in the woods looking for Alex, and find him. They have a conversation that discusses Mina and the concerns about the woods they are in. All three of these guys feel like characters in a movie, and the conversation feels so forced that it broke my immersion and took me out of the film. Later, a female character is introduced, and she points a gun at the children while saying something along the lines of “I hear there’s a phone in the morgue” in response to one of the children requesting to use the phone after they’ve entered the home uninvited.   It’s such an oddly aggressive line to say to a child who is clearly looking for help. The film is full of scenes like this, which really makes it quite unenjoyable.

The Dark was a bit of a disappointment. I’d gone in with hopes of an intriguing premise, but the execution wasn’t strong enough to make it good. There are some interesting decisions with Mina, her backstory, and the conclusion of the film that keep it from being horrible. The Dark earns the Not a Total Waste of Time rating.