Netflix has a new film out directed by Olivia Newman called First Match (2018). It’s not getting nearly the promotion that Bright or Mute did, which is unfortunate. While I can’t speak to Bright’s quality, First Match is a far better film than Mute and deserves your bandwidth. The film follows Mo (Elvire Emanuelle), who is trying to reconnect with her father (Yahya Abdul-Mateen II) by joining the high school wrestling team.

First Match deserves more love from Netflix, but its definitely worth your time

In many ways, this film is a coming-of-age story. Mo craves her father’s affection and care as she’s grown tired of bouncing around from foster home to foster home. He initially seems to want nothing to do with her, until she tells him about her spot on the boy’s wrestling team. Of course, when she tells him it’s not true yet, but she never doubted her ability. The boys on the team are hesitant to have this girl, known for breaking the rules and fighting, on their team – but Coach Castle (Colman Domingo) treats her just like any other interested student. 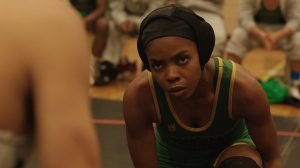 Emanuelle is an immense talent who stands strong in this film. Her character is frustrating to watch at times, as her stubbornness and insistence on a family being genetics often leads to her making bad decisions. However, none of them seem out of place as she struggles to keep the affection of her father, who is having a hard time leaving his own bad habits that initially sent him to prison. Abdul-Mateen has enough charm to convince the audience that he has changed but also has enough of an attitude to show the true colors behind his facade.

Mo’s friend – though I think he is her cousin, I wasn’t able to confirm this – Omari is played by Jharrel Jerome, who delivers yet another great performance in this film. He doesn’t have as important of a scene as he did in Moonlight, but he still gets to play an important part in the story. He often acts as a safe haven for Mo, offering her a place to stay and a shoulder to cry on. Though Mo isn’t always as a good of a friend to him, he seems to always be there when the going gets tough. Their bond is strong, as is the one she slowly forms with her team and her coach.

First Match was entertaining and offered a bit of hope and inspiration. Mo has a lot to overcome to not end up following in the footsteps of her father. The performance by Elvire Emanuelle only elevates the material, making it harder to take your eyes away from the film. It’s definitely one of the Netflix originals that is worth your time, and First Match earns the Not Quite Golden, Ponyboy rating.