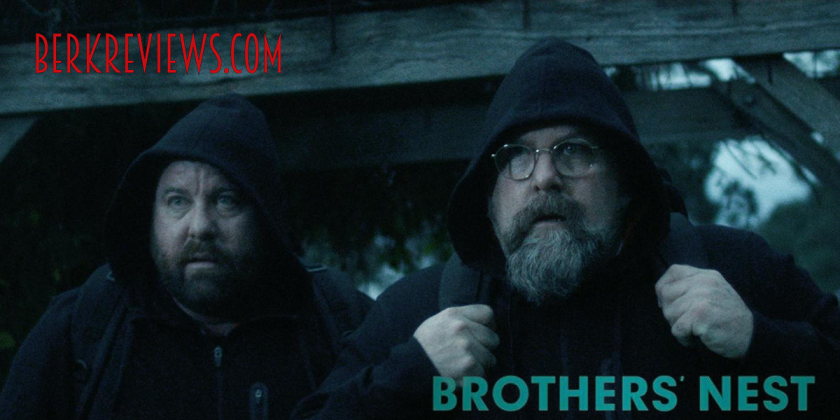 Brother’s Nest (2018) is an Austrailian dark comedy that stars Clayton Jacobson (also the director) and Shane Jacobson. The film is about two brothers – Jeff (Clayton) and Terry (Shane) who are planning to kill their stepfather in order to keep their family’s home and land. It’s far more than just a comedy, but there are definitely plenty of laughs to justify it as one.

The long journey depicted in the film opening – showing the brothers on bikes, crossing fields, and finally arriving at a house in the middle of lots of land – is gorgeous. The camera work is high quality, and feels more like it is out of a crime drama rather than a comedy. Of course, crime is a major element of this film, as the brothers have a plan to get away with murder. In fact, they have a few plans, which help sprinkle in some of that humor.

A large portion of the movie is just the two guys getting things ready and rehearsing the potential scenarios that could occur once Rodger arrives. Luckily, Clayton and Shane are up to the task of carrying a film. Both give excellent performances and bring some great comedic chemistry as well as strong dramatic moments when required of the story. I’ve not seen either before, but this film definitely gives me reasons to explore their other past work and jump into to their future projects with optimism.

There are some moments late in the film, which I’ll leave out specifics to avoid spoilers, that elicited audible reactions from the audience. Of course, throughout the film, the crowd at SXSW laughed, but in the third act, there was a combination of shocked gasps followed by joyous laughter. The film isn’t a satire of the crime genre – it is a crime thriller with comedy in it. Truly innovative and fun, the film doesn’t shy away from its premise in the third act, like many may expect. It is committed to the story, and delivers in a big way.

Brother’s Nest features genuinely funny moments mixed with an extremely compelling story. The plot is structured strongly to slowly peel back more and more information. Considering this film is primarily just two guys talking, it is still very cinematic and demonstrates Clayton’s ability as an actor and director. When Brother’s Nest becomes available, it’s definitely a Must See.