After the success of Harry Potter, there was a heavy influx of young adult novels being picked up for films. The Maze Runner was a film that worked well, and it’s sequel, The Scorch Trials, is another solid entry. It’s an action-packed film with a large cast full of young talent and a very likable protagonist, though he is a bit unreliable as he doesn’t remember much of his life before the first film. That is where the story gets a little convoluted…

Maze Runner: The Scorch Trials is entertaining, but not wrong

Thomas (Dylan O’Brien) awakens in a new facility after escaping the Maze.  Janson (Aidan Gillen) rubs Thomas the wrong way, and he quickly distrusts his new hosts. He seeks to escape with the others from his maze with help from their new friend, Aris (Jacob Lofland), who escaped his own maze. They soon find themselves facing many new dangers ahead, with  W.C.K.D. close behind.

O’Brien definitely has what it takes to be the lead in an action series. While American Assassin was underwhelming, he really garners the support of the audience in these films. He earns the respect of the other characters in the first film, and again with new characters Aris, Brenda,  (Rosa Salazar) and Jorge (Giancarlo Esposito). It’ll be interesting to see how he develops the character in the new film, and what roles he takes now that the series is done. 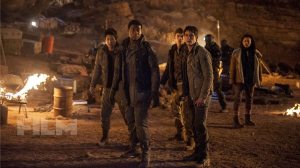 Scorch Trials feels a little bit more like an adventure film, as the characters are moving through a much larger world than the first movie. They find themselves up against a variety of foes, and never really knowing who they can trust. The film does the ensemble cast justice, as I frequently found myself concerned for all of them – not just Thomas. Minho (Ki Hong Lee), Newt (Thomas Brodie-Sangster), Frypan (Dexter Darden), Winston (Alexander Flores), and Teresa (Kaya Scodelario) all bring something to the film that makes you root for them. The female characters in the film aren’t on-screen very much, but they do have positions of importance or power.

While the film is enjoyable, it’s also not super memorable. There are moments that stand out, but ultimately, it’s just another teen action film. It’s better than some of the other ones that have been adapted – I’m looking at you, Percy Jackson movies, as you are a pale comparison to the books you’re based on! Maze Runner: The Scorch Trials earns the Decent Watch rating.