I found my place in high school my junior year when I joined the newspaper. It was such a natural fit that it wasn’t long before I started planning my future as a reporter. I romanticized the job and had dreams of being the next reporter to break the big story. Subsequently, movies like The Post (2017) elicit my deep passion for the importance of journalism and the role reporters are meant to play in our society. It’s no secret that I’m a Steven Spielberg fan either, so it’s probably not shocking that his take on the historic events of the New York Times and the Washington Post publishing top-secret research papers on the Vietnam War worked for me.

The Post is a terrific film with a powerful message 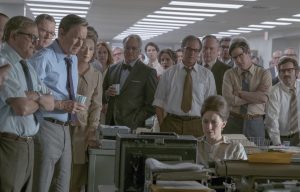 After the New York Times has an injunction placed against them to stop printing their findings from the paper, the Post goes looking for their own copies. Kay Graham (Meryl Streep), the first female newspaper publisher, has pressure coming from her board to not publish, while Ben Bradlee (Tom Hanks), the executive editor of The Washington Post, is arguing for the necessity to publish.

Spielberg is at the top of his game with this film. The tension builds, and things move in engaging ways. There is an early scene of a debate between Hanks and Streep that reminds me of Hitchcock’s blocking in Vertigo. In this scene, Streep and Hanks are both standing, and he asserts his position, which forces Streep to sit. The camera is looking down on her, and up at Hanks. Gradually, as her confidence builds, the camera starts to level off and up she stands, taking back the power of the scene. There are at least three or four moments like this in the film, and each gives the cast an opportunity to shine. Even late in the film, there is a moment where a character states an obvious theme in a way that is clearly meant to get an emotional reaction from the audience: and it worked.

There are tons of things to appreciate in this film

Streep and Hanks give stellar performances, but there are tons of supporting cast members that are also fantastic.  Sarah Paulson, Bob Odenkirk, Tracy Letts, Bradley Whitford, and Bruce Greenwood all get some valuable moments. Odenkirk especially gets some key moments playing Ben Bagdikian – a clearly unfortunate name for a reporter – as he goes on the hunt to get a copy of the report, rounded out by a few more moments as the lawyers deal with potential consequences of running the article.

One of the best sequences in the film is a group of reporters at Bradlee’s house going through the 4,000 plus pages of the report that are unorganized. There are piles everywhere, and the chaos is palpable, but the drive of them all is inspiring. Spielberg even manages to interject some humor in this tense moment. The film works again and again in relaying the message that it is the newspaper and the freedom of the press that keeps the power of the government in check.

Had The Post come out at any other time it would have been a Must See film. It is even more so right now. The artistry in the film makes it worth the cost of admission; the message of the film is priceless. There shouldn’t be much surprise, of course, considering Hanks plus Streep times Spielberg is an equation that often equals cinematic gold.